Groundsearch Australia has recently entered into an agreement which allows for the provision of DHEM and DHMMR survey services as per the document link below. 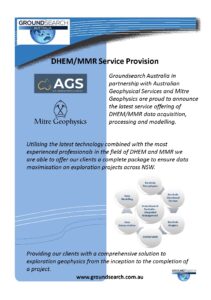 Transient electromagnetics, (also time-domain electromagnetics / TDEM), is a geophysical exploration technique in which electric and magnetic fields are induced by transient pulses of electric current and the subsequent decay response measured. TEM / TDEM methods are generally able to determine subsurface electrical properties, but are also sensitive to subsurface magnetic properties in applications like UXO detection and characterization. TEM/TDEM surveys are a very common surface EM technique for mineral exploration, groundwater exploration, and for environmental mapping, used throughout the world in both onshore and offshore applications.

Two fundamental electromagnetic principles are required to derive the physics behind TEM surveys: Faraday’s law of induction and Lenz’s Law. A loop of wire is generally energized by a direct current. At some time (t0) the current is cut off as quickly as possible. Faraday’s law dictates that a nearly identical current is induced in the subsurface to preserve the magnetic field produced by the original current (eddy currents). Due to ohmic losses, the induced surface currents dissipate—this causes a change in the magnetic field, which induces subsequent eddy currents. The net result is a downward and outward diffusion of currents in the subsurface which appear as an expanding smoke ring when the current density is contoured. These currents produce a magnetic field by Faraday’s law. At the surface, the change in magnetic field [flux] with time is measured. The way the currents diffuse in the subsurface is related to the conductivity distribution in the ground.

Induced polarization (IP) is a geophysical imaging technique used to identify the electrical chargeability of subsurface materials, such as ore.

Induced polarization is a geophysical method used extensively in mineral exploration and mine operations. In an IP survey, in addition to resistivity measurement, capacitive properties of the subsurface materials are determined as well. As a result, IP surveys provide additional information about the spatial variation in lithology and grain-surface chemistry.

IP surveying is an exploration method involving the measurement of the slow decay of voltage in the ground following the cessation of an excitation current pulse (the time domain method). IP surveys measure both the capacitive and the resistive properties of subsurface materials. The resistivity measures the resistance to current flow while the current is applied and the IP measures the capacitive ability to retain the charge after the current is turned off. Induced polarization (IP) is the Earth’s capacity to hold an electric charge over time. IP measures the voltage decay curve after the injected current is shut off. The higher the IP, the longer over time the charge is held—IP decays over time.

An IP survey can be made in time-domain and frequency-domain mode:

In the time domain induced polarization method, the voltage response is observed as a function of time after the injected current is switched off or on.

In the frequency domain induced polarization mode, an alternating current is injected into the ground with variable frequencies. Voltage phase-shifts are measured to evaluate the impedance spectrum at different injection frequencies, which is commonly referred to as spectral IP.

The IP method is one of the most widely used techniques in mineral exploration and mining industry and it has other applications in hydro geophysical surveys, environmental investigations and geotechnical engineering projects.

There are a number of array styles and geometries that can be deployed depending on the depth of investigation, target size and orientation and sub surface resistivity.

Depending on subsurface resistivity, current injected, receiver sensitivity and transmitter-receiver geometry, IP measurements allow geophysical exploration from a few metres below the surface to several hundred metres of depth.

Interaction between the solar wind and magnetosphere and worldwide lightning activity cause natural variations in the earth’s magnetic field, inducing electric currents, known as telluric currents, under the Earth’s surface. These varying electric and magnetic fields are then measured over a wide range of frequencies, typically from 10,000Hz to 0.0001 Hz. The ratio of the electric field to magnetic field provides simple information about subsurface conductivity. A subsurface resistivity model is then created using this tensor. Because the skin effect phenomenon affects the electromagnetic fields, the ratio at higher frequency ranges gives information on the shallow Earth, whereas deeper information is provided by the low-frequency range. The ratio is usually represented as both apparent resistivity as a function of frequency and phase as a function of frequency.

Different rocks, sediments and geological structures have a wide range of different electrical conductivities. Measuring electrical resistivity allows different materials and structures to be distinguished from one another and can improve knowledge of tectonic processes and geologic structures.

A typical full suite of MT equipment (for a “five component” sounding) consists of a receiver instrument with five sensor: three magnetic sensors (typically induction coil sensors), and two telluric (electric) sensors. For exclusively long-period MT (frequencies below approximately 0.1 Hz), the three discrete broadband magnetic field sensors may be substituted by a single compact triaxial fluxgate magnetometer. In many situations, only the telluric sensors will be used, and magnetic data borrowed from other nearby soundings to reduce acquisition costs. MT can also be acquired as part of a larger distributed or 3D array with multiple electrical sensors and fewer magnetic sensors distributed throughout the grid.

A complete five-component set of MT equipment can be backpack-carried by a small field team (2 to 4 persons) or carried by a light helicopter, allowing deployment in remote and rugged areas. Most MT equipment is capable of reliable operation over a wide range of environmental conditions, with ratings of typically −25 °C to +55 °C, from dry desert to high-humidity (condensing) and temporary full immersion.