08 Apr How new infrastructure is affecting the life of a Geophysical Logger.

There aren’t many roles in the mining exploration sector that do not require an alarm clock to wake you up at “stupid ‘o’clock”. For a Groundsearch Australia Geophysical Borehole Logging Technician, the clock-on time starts once they arrive at the office to start preparing for the days’ work set out before them.

From the office, the geophysical borehole logging job may be located anywhere in the Hunter Valley, regional NSW or potentially further afield. Typically, travelling to site from the Groundsearch office will take 1 to 4 hours each way, and between the mobilisation to and from site a day’s work needs to be completed.

Negotiating traffic to and from the work depot at different periods can cause varying transit times. Peak hour and school drop off times are understandably difficult and slow, so the motivator to beat the traffic pre work time with an early start is a no brainer, but sometimes impossible to avoid at the end of the day when returning home from site. For a contractor, sometimes the hardest part of the job is getting to and from site – safely.

There have been a few game changers over the years in regards to new roads that provide faster access to the Hunter Valley coal mines or Southern NSW coal and gas fields. The Hunter Expressway has relieved the mining traffic congestion commuting to the Hunter Valley. However, the most mind blowing piece of road infrastructure that I have come across is the NorthConnex tunnel that links the M1 to the M2 in North Sydney.

(Note: You know you are getting old when you get excited about a new piece of road infrastructure. But the NorthConnex is something to truly get excited about if you have ever had to endure Pennant Hills Rd on any day in peak hour.)

How has the new NorthConnex affected my work day? I now don’t have to depart for work an additional hour early, on an already super early start. I now arrive at my regular destination in Western Sydney for a regular client early and not exhausted from negotiating a large logging vehicle through peak hour Sydney traffic. The client possibly saves on rig downtime waiting for my arrival and I have more time to complete the geophysical borehole logging tasks required for the day. It’s a game changer!

Every extra hour made available onsite due to time saving not only makes the travelling time safer by reducing fatigue, but it allows for more onsite time to conduct Geophysical borehole logging surveys such as Cement Bond Logs (CBL), North Seeking Gyroscopic Deviation Surveys, or any other required borehole survey that Groundsearch Australia offers as part of its standard services package.

Most likely the client won’t notice that that the loggers’ driving experience was more pleasant than usual, but they will notice the prompt arrival times and fast job completion rates. 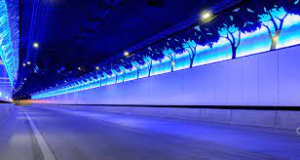